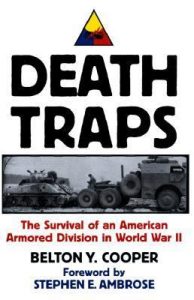 I recently completed a 3-Day Tour with the Cooper family originating from Birmingham, Alabama, USA. In 1998 Belton Y. Cooper (BYC) published ‘Death Traps” a fantastic and quite unique book drawn from his memoirs with the US 3rd Armored Division during WWII. Belton Y. Cooper served as a liaison officer operating between the front line armoured units – mainly Sherman Tanks – and the maintenance echelon. His unusual position of moving back and forth between the lines gave BYC a unique insight into how a US Armored Division operated during WWII. Eight members of his family wanted to visit the sites he wrote about in his book – where he first came under fire, where he first saw dead bodies and where he crossed rivers, bivouacked under enemy artillery fire and witnessed the carnage and debris of a savage war.

Based at the Manoir du Quesnay between Bayeux and Trévieres we followed BYC’s route from Omaha Beach where he landed in July 1944 D+28, through the Normandy Bocage around St-Lô as far as the Falaise Pocket. We visited sites previously known so well to the group through reading Death Traps. To actually stand in those very positions was clearly a very moving experience, particularly for BYC’s three sons – Belton Jr, Lloyd and Spencer. 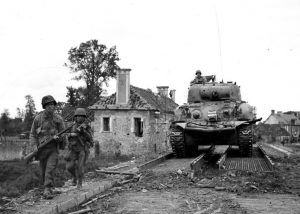 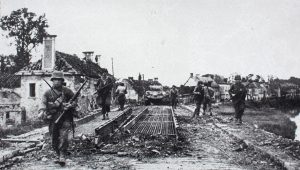 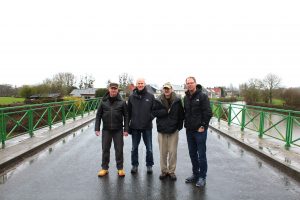 From L to R Gary Weight, Lloyd, Belton Jr and Spencer Cooper on St Fromond Bridge – taken from the approximate position of the above 1944 photographs

Whilst it took a fair amount of time to accurately piece the route together it was ultimately worth every minute and I also learned a great deal! Hampered sporadically by some inclement weather it was a wonderful tour with great people. If you haven’t already read the book then I recommend you do… 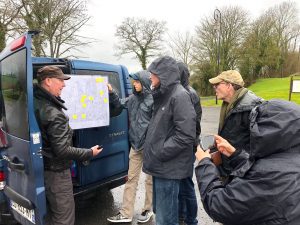 Death Traps is available at Amazon US

…and many other outlets!