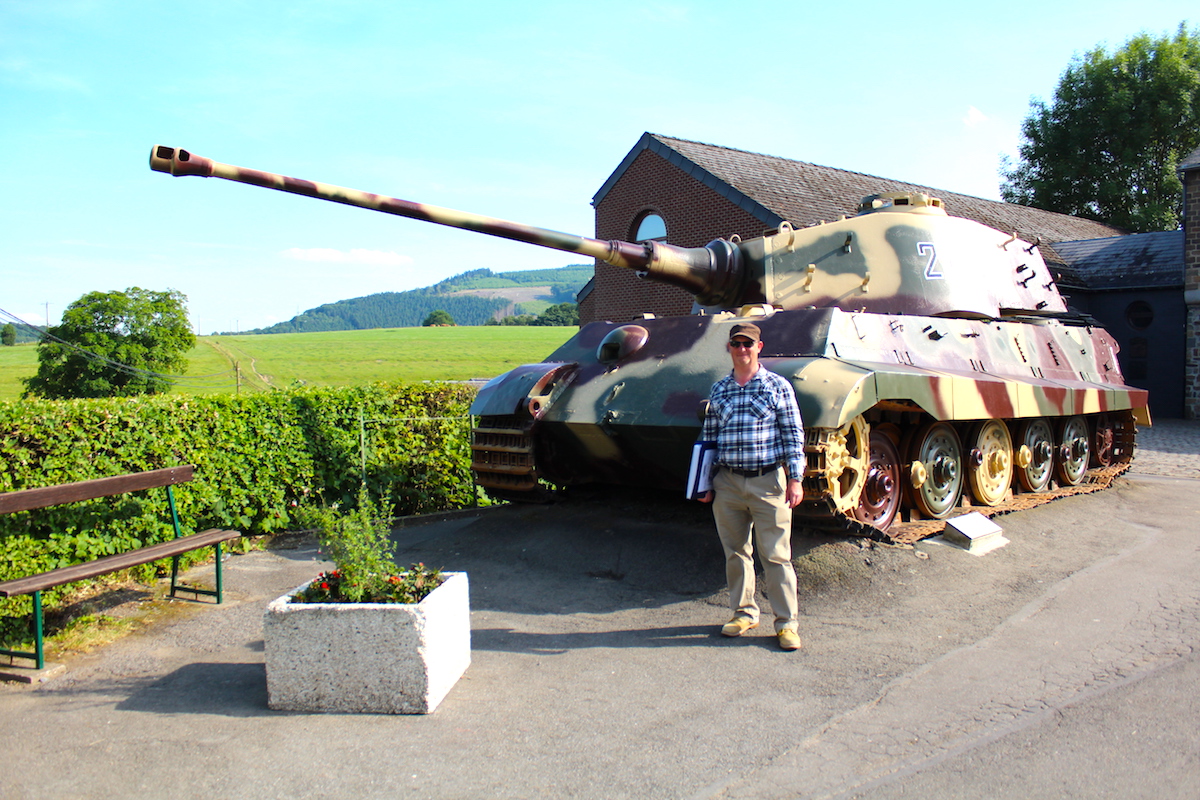 This tour begins by following German SS tank commander Colonel Jochen Peiper’s route through the Ardennes. This was one of the first actions of what was to become the Battle of The Bulge and initially Battlegroup Peiper found success by overrunning American blocking points and pushing deeply into Allied territory. Aided significantly in the early stages by the bad weather which kept the Allied airforces on the ground and visibility to a minimum Peiper began to stretch his own supply lines. Other German units that were to be keeping in line to the north and south soon got bogged down by swiftly reinforced Allied defensive positions and the ground gained by Peiper, now significantly further west than any other German unit in the area, soon presented problems particularly when the weather cleared. Having accidentally bypassed a critical Allied fuel dump, fuel became a serious issue and Day 1 concludes at La Gleize – site of one of Battlegroup Peiper’s King Tiger tanks (#213) – left behind after it ran out of fuel!

On Day 2 we concentrate in and around the town of Bastogne. Bastogne was encircled for the first week of the battle until armoured elements of General Patton’s 3rd Army broke through to relieve the besieged town held mostly by the US 101st Airborne Division. We spend time in the town, at various monuments on the perimeter and also in the surrounding woods where the troops fought through the freezing cold winter living in foxholes and trench systems in the deep snow.

These two days (which can be done in either order) essentially create the basis for an excellent overview of the Ardennes Offensive – Operation Wacht am Rhein – Battle of the Bulge, however or whichever name you wish to call it. Extra days can be added to include many other sites which are just too numerous to mention on here. For example Luxembourg and the southern shoulder of The Bulge, the Elsenborn Ridge and the northern shoulder or the German start positions in Germany and then following the routes westward. And as with any of our tours if you wish to follow a particular unit or family member this can also be done.

We follow Battlegroup Peiper through the German/Belgian border at Losheim through to La Gleize stopping at many sites – the general route is itemised below.

Battle for Bastogne and the perimeter defences. Main sites listed below – (not in order).

“Dear Gary: Thanks for the summary, how amazingly thoughtful. I had only an approximate idea of what to expect. Your tour exceeded anything that I could have imagined. Well paced, fantastic information. You have an amazing mastery of the military units and their commanders. Two great days. Congratulations and thanks from both of us. Bernard Rowe – Vancouver, Canada.”