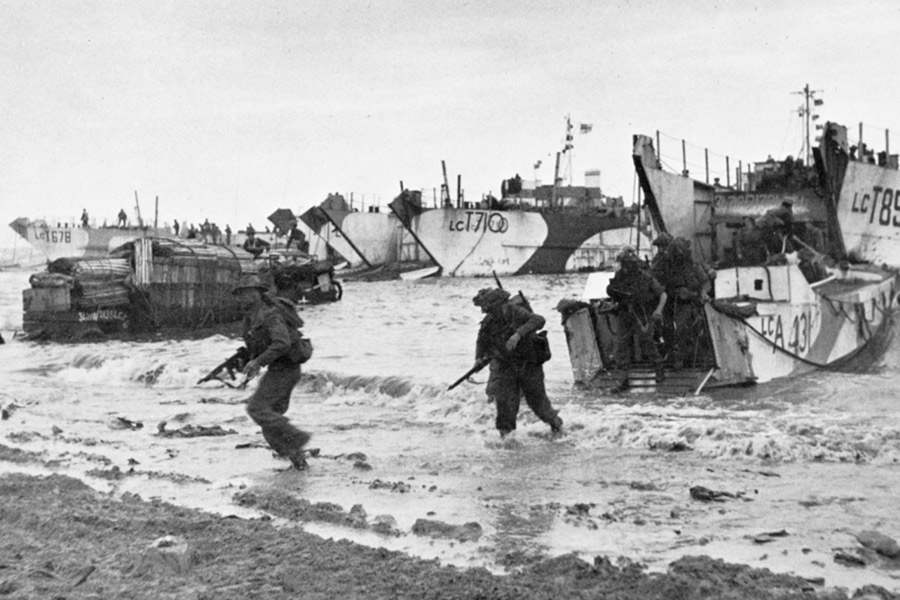 This tour begins at Sword Beach and the morning is spent dealing with the multitude of actions that took place within this area – various objectives for a wide range of units – infantry, armoured, commando, Royal Marines to name but a few. The main stops for this day are highlighted below but there are many smaller stops at sites of particular interest – helping to build-up the picture of assault and then consolidation – beating off counter-attacks whilst still attempting to secure the strategic and tactical objectives that were so important. Naval and air force participation is discussed throughout. We then proceed along the coast to Juno Beach where an overview of the Canadian landings is explained and we stand on the spot where such personalities as Churchill, Montgomery, King George VI and de Gaulle first landed in 1944. The tour then visits various spots of Gold Beach, we visit the location where the only VC was won on D-Day and we visit the engineering marvel that is the majestic Mulberry Harbour at Arromanches. The tour moves on to the Longues Battery were one may walk among the fortifications that house the only remaining German Coastal guns – perched high on 40m cliffs offering fantastic views into the channel. We end the tour by paying our respect to the fallen at the sobering Bayeux War Memorial and Military Cemetery.
This tour is specifically designed to give an excellent overview of the British involvement on the Normandy beaches on D-Day.

Dear Gary, On behalf of myself and my family may I thank you for a most wonderful day. The visit exceeded all our expectations, we were all most grateful for the way you were able to bring to life the events surrounding the invasion and most obviously the way in which we were able to follow in the footsteps of both my father and the other brave troops involved in the invasion. I can honestly say that it was a very humbling occasion, a great pity my Dad never talked about it!
Once again Many Thanks. Kind Regards, Stephen Evans, London, UK

Category
This tour forms part of the 2 Day British Highlights tour but you can add this to any of our tours to expand your knowledge and experience of Normandy. Good places to stay - Ouistreham, Arromanches, Crépon, Creully, Caen or Bayeux
More Info
← Previous Project
→ Next Project
Copyright © 2021 Pegasus Battlefield Tours
Go Top
This site uses cookies: Find out more