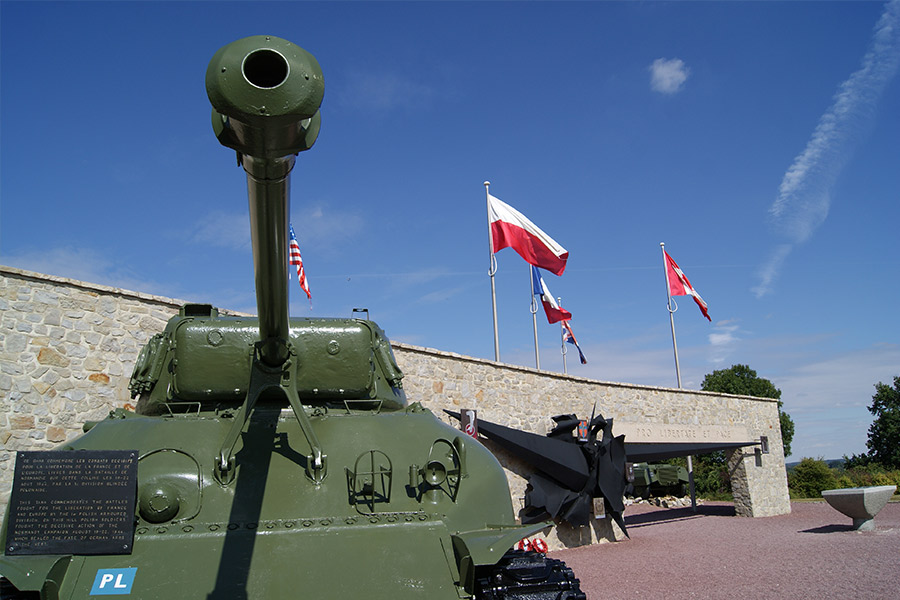 Trace the route of General Maczek’s Polish 1st Armoured Division from their arrival in Normandy to their baptism of fire in Operation Totalize through to the Falaise Pocket and the horrific battle of The Mace – or known by the Polish as the Maczuga. Polish forces had gradually formed up in the UK during the early years of the war as increasing numbers of Polish men made their way to the UK from German occupied mainland Europe. Polish pilots were vital during the Battle of Britain in 1940 and continued to be so for the rest of the war. Polish naval forces were supplied with allied ships and infantry units were formed that fought in Italy. A Polish Airborne battalion was later deployed in Operation Market Garden during September 1944. The Polish forces needed no excuses for fighting against the Germans and this resulted in some extremely vicious encounters – often hand-to-hand combat – fighting to the death – no surrender. General Maczek’s 1st Armoured Division arrived in Normandy in late July 44 and this tour traces the route from the Division’s two points of entry into Normandy – Arromanches (Gold) and Graye-sur-Mer (Juno) – through to the famous battle in the Falaise Pocket on Hill 262 North particularly around Boisjos Farm. The tour ends at the unique and sobering Polish Memorial and Cemetery at Urville-Langannerie. This is an interesting tour devoted to the brave Polish men who braved all manner of hardship during the war only to be almost written out of it by many historians. Indeed, General Maczek became one of the most highly decorated Allied Generals of World War Two. Sadly, after the war, due to the Iron Curtain, many men could never return home to their families due to fear of Soviet oppression towards military personnel, regardless of whether or not they were still serving.