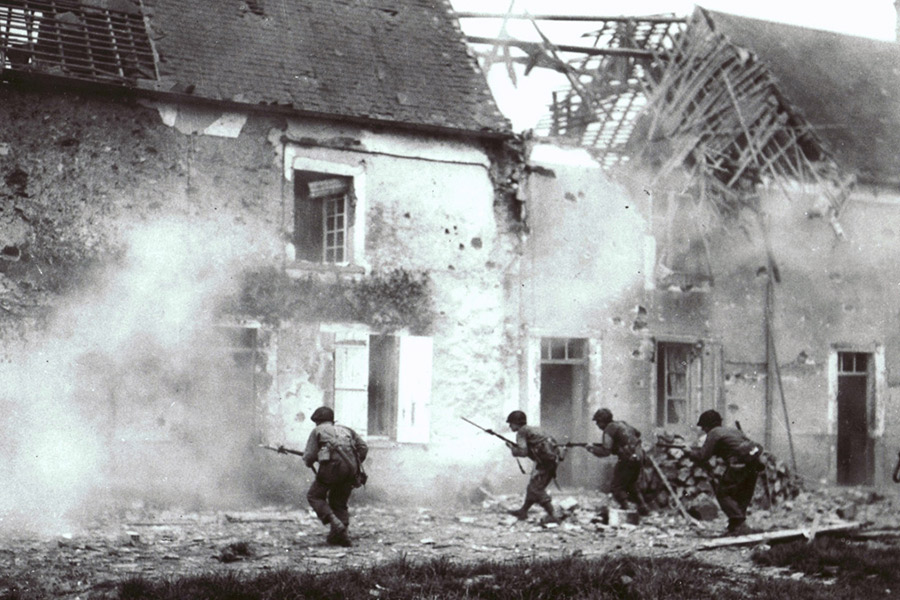 This tour looks at the heroic stand of the US 30th Infantry Division at The Battle of Mortain. During the night of 6/7 August 1944 Hitler launched Operation Lüttich – the objective of which was to launch an armoured thrust west to reach the coast at Avranches, therefore severing supply lines to General Patton’s US 3rd Army that had broken out to the south into Brittany and the Loire Valley. Out of the heavy mist rolled the last of Hitler’s reserves including Otto Weidinger’s “Der Führer Regiment” of the 2SS “Das Reich” Panzer Division – initially taking the US forces by surprise the US 30th Infantry Division, led by Major-General Leland S. Hobbs, fought back against overwhelming odds holding the high ground on and around Hill 314 and a number of other strategic points. Aided by rocket firing Typhoons from the RAF’s 2nd Tactical Air Force, and later reinforcements, the German armoured thrust was eventually repulsed. This led directly to the retreat and annihilation of the German 7th and 5th Panzer Armies in the Falaise Pocket. This tour visits all the main sites where the battles took place and also many other smaller sites where US and German command posts, aid posts and road blocks were established – including the infamous Jochen Peiper’s forward tactical CP. The surrounding area also gives some of the best examples of the dangerous Normandy Bocage – the hedgerows.

As I review the itinerary you sent us, all the rich memories of our being there with you come flowing back. You gave us a very special, once-in-a-lifetime experience as you took us through the complex events of that time with your pictures, descriptions and explanations.
Gary, you have an amazing gift for teaching and explaining events that I have never observed before. Your pace was smooth, unhurried but clear and of incredible depth and breadth. You described the sequence of events, people, their personalities and actions, and you showed us the buildings, terrain, and the dozens of artifacts and pictures that tied it all together. You did this in ways that, quite simply, made that part of 1944 become real and personal for us. It was, truly, an amazing and unforgettable experience!

We have recommended you highly and will continue to do so. Please feel free to use these comments on your web site. And, if someone should question the source or validity of the comments, please give them my email address so they can contact me directly.

Thank you again, so very much, for two of the most incredible days of our lives. Most sincerely, Mike & Yvonne Jones, Gulf Shores, Alabama, USA